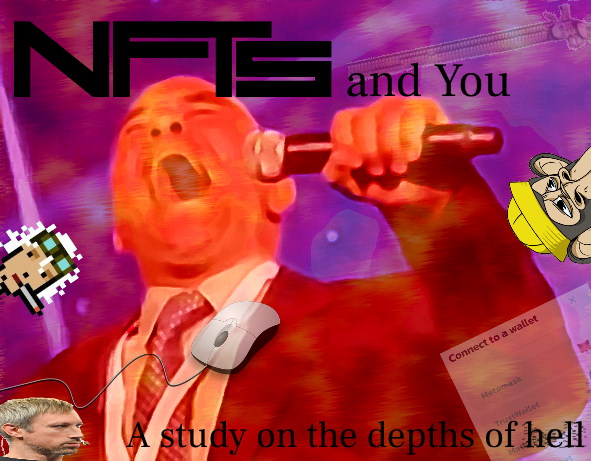 Honestly, I had considered that maybe, just maybe, we could come to some agreements this year to peacefully end the ongoing madness surrounding NFTs. A lot of works being copyminted, famous people getting in on the stuff, cryptocurrency values that fluctuate more than the chance of me dying in a Enter the Gungeon run, maybe we could really leave that in 2021.

And then someone minted ALL NG Secret Santa 2020 icons . I had enough. Fuck you, fuck people positive to the NFT cause, you are the problem and its time for you to boil.

Oh right, you want me to explain the terms. Alright.

A list of records tied together through cryptographic means. The messiah of cryptonerds. In cryptocurrency, transactions are the records.

Electronic money based on cryptography. The most famous and biggest one is Bitcoin, as first described in the Bitcoin whitepaper. This peer-to-peer electronic cash was set to make trade better in the internet by not relying on something like Paypal.

Of course nowadays Paypal is into stuff like Bitcoin so you can tell this failed spectacularly. Bitcoin nowadays is a mere money market, as is all other cryptocurrency derived from it, such as Ethereum, Tezos... Dogecoin.

A proof is some kind of cryptographic way that others can be certain new transactions are valid contribution to the blockchain. Proof of work is the most notable one (first used in Bitcoin) and its also the most wasteful, as its computations aren't used for anything other than reaching that proof.

Ethereum sticks 'smart contracts' into the mix, code executed when transactions are made. The cost of execution is massive and the computations insanely inneficient. This, of course, became the favorite of many and eventually the foundation for Non-Fungible Tokens with the ERC-721 standard. May I add Ethereum is Proof of work based? (but dont worry guys, they'll transition out of it soon!! soon!!11!)

Tezos is a crypto quite popular for being 'clean' (debatable) since it uses Proof of stake for validating its blockchain. It is thus also used for so called 'Clean NFTs'. Don't fall for it, there are many inherent issues with NFTs.

(also known as No Fucking Thanks)

NFTs are just that, tokens that represent something and have scarcity. Any cryptocurrency implementing the proper standards can enable minting a token off something that can then be traded for whatever sum of currency. The most common something is art. Since what the token points to is a mere link, that something can also be a GIF, video file, model, whatever.

The question of the work not actually being contained in the token is still a pretty unsolved one in the area. Some implementations have allowed storing the definition of a generative artwork within, so called "on-chain" stuff.

Thankfully, most people are really stupid and don't even bother storing the stuff on, say, IPFS (explained later). If your work was minted without your consent and its on some rando host you can contact them to take it off. Don't bother going through the Marketplaces, they'll happily ask a lot of personal info for the possibility of doing something.

Marketplaces include Rarible, OpenSea, HicEtNunc, Nifty Gateway, so on and so forth. To interact with these awful things you'll require creating a crypto wallet.

(thats where the apes go)

A wallet stores all those cryptocurrencies and tokens you acquired. It may contain some information you put in. Cryptonerds lovingly refer to it akin to a passport to the world of 'web3', where nothing makes fucking sense, is somehow worse to operate than the world of 'web2' with even sillier sign-ins, and isn't even fucking decentralized. Don't bother.

In case of an emergency, accessing a wallet will require a series of random words first generated in the creation. This is a reasonably fine security measure, though it is no surprise it is a frequent target of scams. Maybe dont give the keys to your safe to odd individuals on Discord. Then again, you earned the Loss for using these things in the first places.

Cryptowallets are also software of very questionable security for all the crypto/tokens they have. The most popular ones like Metamask are browser extensions written in Javascript with ridiculous amounts of dependencies. If one of those libraries were to have some exploit, expect an event the size of log4j's. All will lose their apes.

Even ones that instead store things away from the internet ('cold wallets') cannot work very well due to the sheer focus of 'web3' in having everything be online. Having to transfer things between 'cold' and 'hot' ones all the time, of course, introduces the possibility of exploits... And making the investment useless.

People had the amazing idea to auction off loads of crypto-related domains as tokens. As you'd expect, most are scalped right away. The notable use of these is to make it easier for someone to send you some of that crypto, since well, a wallet address is kind of fucking long.

Having one of these allows software to resolve the domain to your wallet. Since cryptonerds love to stick anything crypto to their identity, you can often find them putting these as their display name.

The most common domains are '.eth' and '.tez', for Ethereum and Tezos respectively. Scroll down to Dealing with the Crypto Problem for what to do when you find one of these goobers.

Someone actually reasonably clever will put the links to the work on these. IPFS acts akin to a slower BitTorrent with URLs (makes you think) and Sia, being a crypto built on Proof of storage, uses the storage that'd otherwise be wasted (makes you think x2) for validation to store your thing with high redundancy.

Some issues: IPFS, like BitTorrent, still relies on there being people serving your stuff. No seed, no feed. There is little incentive to actually do so unlike you and a group of friends torrenting some crazy ass games. It is also hillariously complicated to operate... unlike BitTorren- it's just worse BitTorrent

Sia, being cryptocurrency, is subject to speculative effects. If Bitcoin were to go down tomorrow you'd be hard pressed to see anyone wanting to be paid this derivative useless digital money to keep storing more crap. And they want you to host websites on it... ugh.

Minting art that you do not own is a common occurance in the land of NFTs, since there is little to no regulation. Many nowadays don't want to post their work out there anymore in fear of this happening, great thanks cryptonerds! Eat one, alright?

Reporting a copymint is a coin toss; marketplaces like OpenSea build their popularity off the frequent scams, so if you REALLY want to take it down, better fork over where you fucking live, pal, we just gotta make sure. Oddly enough minting is quite easy, since you only need to fork over some crypto. May I add most marketplaces take a cut? 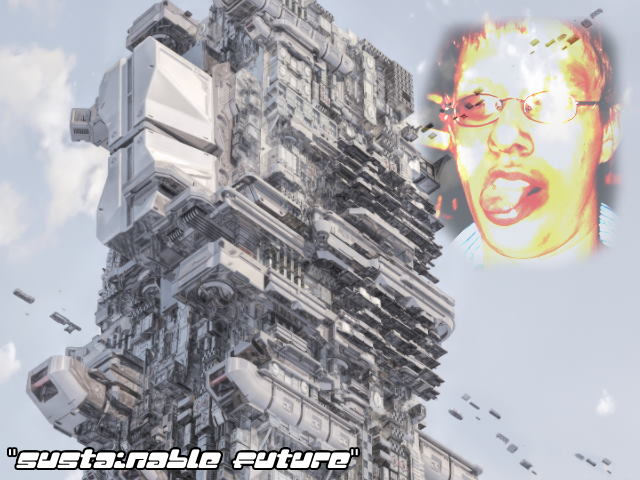 This is supposedly "decentralized."

WAGMI: WE ALL GONNA MAKE IT

A mantra that, if you just put your heart, soul and life savings into this mess, you'll get loads emone.

NGMI: NOT GONNA MAKE IT

An insult that the other person will never get loads emone for making some 'poor' investment, like say, not giving a fuck.

A mantra that Big Anticrypto (some person on twitter) are trying to destroy their 'underdog dream' by calling out actual problems in the technology.

FOMO: FEAR OF MISSING OUT

Oh, the irony. This is a common tactic to force others into choosing someting because everyone's getting in on it, and you don't wanna be the last one, do you???

Stock market terms, how funny. These refer to Bull and Bear markets. The bull represents a rise in value, the bear represents a fall.

Pulling a bunch of dinguses into your scam and promptly running away with all the crypto. Later bitches!

Dealing with
the Crypto Problem

The sheer display of disapproval towards Troy Baker getting in on the stuff (and the later reveal 'VoiceverseNFT' were misusing 15.ai for their work) show the public is indeed capable of pushing back against this cancerous growth on the internet. However, punching up isn't enough, we must unfortunately be more hostile.

Ban/block/silence anyone
dealing with that stuff

Yep, you heard me right. If there are people with NFT stuff, be it in your Discord, Matrix, IRC, whatever chat, do it. This may sound very rigid, maybe they are your buddy, but in that case try to convince them beforehand what they are doing is not worth it. In the case of financial support you can setup the proper help for them with friends. Cryptocurrency exploits the desperation of those much less successful.

These things rely on people thinking there is value to it. There isn't. Whenever prompted, show the various ways crypto cannot work as currency and NFTs cannot work as proof of 'owning' something. The less people think its stupid, the more idiotic investors will believe that iT w1ll G0 to DA m00n. Without funds and support, watch as it all falls like dominos.

Information is power. This may not be the BEST info on how this all works but you can think of it as a wikipedia page: a brief explanation and points to jump off from. Sometimes that can be enough, so uh, share! I'll also leave down below interesting articles about this unblessed mess.

The Bizarre World of Non-Fungible Tokens (NFTs, why they dont work)

Web3 is not decentralization (That whole 'web3' mess)

The blockchain collection (articles about the problems with 'web3')

Back to the lab again!