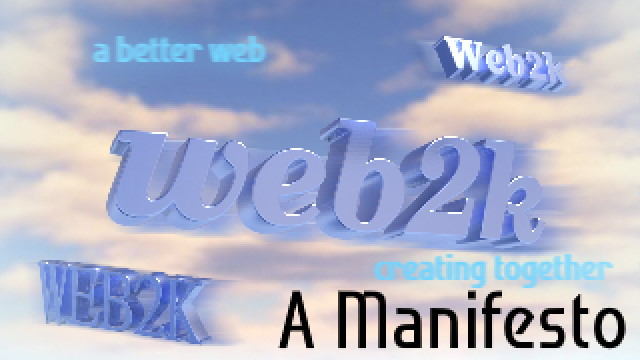 As of this writing, the internet is as divided as ever. We are experiencing the emergence of the so called web3, which promises to liberate us from the shackles of Big Tech, and to truly own things, bank the unbanked, so on and so forth.

The truth however, is that web3 is a lie. The shackles are now owned by Venture Capitalists and rich tech individuals, you are treated to a facsimile of scarcity for the sake of monetizing every little thing you do, and money is redistributed yet again on the hands of those who already had huge sums to begin with.

We saw cryptocurrency turn from the possibility of improving how we execute transactions in the digital realm to a nightmarish jumble of financial machines that only exist while tethered to unregulated money markets.

It's all in the pursuit of promising you freedom and taking it all away, because they were angry they couldn't be the ones with the boot, stomping in the face of humanity forever.

We are also promised the metaverse, virtual worlds where our identity is defined by how much we spent in order to obtain any customization whatsoever, dancing on empty floors to empty crowds to just as empty screens. And all built in services more centralized than ever, despite their claims.

It's odd because not once do they ask about how to improve things for others; after all, in web3 it is all about killing the evils of trust. A childish view of the world that could only come from pampered people in their piles of fool's gold.

It makes any semblance of trust easy to shatter, everyone is paranoid or eager to exploit that little trust. It explains all the scams you hear of. While you may see a scam anywhere, make no mistake: this is a revolution in fraud.

With all this madness, it's easy to be scared, ignore it, for it may just be inevitable after all. It need not be though, it'll only be inevitable so long as we believe it is.

The web2 so often mocked by the folks is only poor because it needs improvement. We were so worried about the shackles we never thought about the key near us!

Many things form this key. We have federated platforms such as Mastodon, which anyone with a server can host as much as anyone can be a part of, and simply talk to one another. They can even talk to different platforms all together thanks to open protocols.

The metaverse so often hyped already exists, it's just way cooler and called VRChat. It contains chatrooms created by people who go by any avatar they desire and have fun. We can learn a great deal from it!

When we wish to share files to one another, Torrenting, your old friend, works as great as ever! It's after all the protocol where the more people connected, the faster the transfer!

When it comes to chat we also need not rely solely on a service like Discord. Protocols like XMPP and Matrix provide alternatives we can rely on when in need. Having more options beats none, just pick a client and tell your friends!

This is the core of Web2k, where we take the web of creation and improve it.

In the 2000's we had already seen the rise of some of these technologies such as Torrenting, but they aren't obsolete! We need not throw them away for the shiny cryptotoy when instead we can make them more accessible to everyone.

By teaching others about these technologies, we can achieve much more, and inspire better things.

You can make a group and have fun sharing with your friends, and share that fun with other groups too.

We encourage archival and fight back a world where we lose nice things to the vapid noise.

And instead of a void promise like web3, well, you do not need to invest your life savings to help make it happen!

You can learn how to torrent, archive your favorite media, make friends and find cool ways to share and surf on the net!

I hope to have inspired you, so one at a time, we mend what we have into a better future. In the name of fun.

Points to start from!

These are all free, sometimes open source platforms, protocols and software that allow you to communicate, share and create with others.

The best closed source services always have open ears to their communities, and open source ones allow those communities to join in and help improve and expand what's possible.

The 'Fediverse' constitutes various platforms akin to the ones you know (Twitter, Facebook, YouTube) but capable of being hosted by anyone with a server, as well as easily interacting with any other that talk with open protocols.

I added a link to a nice informative about an old software for virtual chat as it may not be very useful but is certainly interesting! The late 90's-early 2000's had various similar experiments we could learn more from.

Whilst torrenting is usually associated with piracy, it cannot be denied it revolutionized the transfer of large files around the world, and to this day runs circles around downloading something on a browser.

By picking a client for your Operating System, you have more options for chatting with people around the globe! Matrix chat competes well with the offerings of Discord, and XMPP is extended in all sorts of ways in various clients.

Thanks to RoligtJackson for proofreading!